Posted on April 18, 2016 by festivalfordrama

Deadlines to Submit your Screenplay, Novel, Story, or Poem to the festival:http://www.wildsound.ca

A struggling screenwriter comes across a forgotten film star who uses him to help her with her comeback.

There are lot of films that tell us the story about the life behind glamorous Hollywood. From Singin’ in the rain to America’s sweethearts, but no one shows it as real as Sunset Blvd. This is the true story about Hollywood, the land of dreams and definitely the land of broken dreams.

The reaction was strong after its premiere and writer/director Billy Wilder was more or less banned from the city. The big studio bosses were not happy about how Wilder showed how their business was run. As a Polish immigrant who tried to breakthrough as a screenwriter himself, Wilder knows how to show the life of a struggling writer in an unpleasant and corrupt entertainment jungle. A world where a dream can be crushed as quickly as you dreamt it. As the narrator and hero Joe Gillis (Holden) describes it, “haven’t we all dreamt of getting our names up on that screen”. And once you’ve had it, you want it again. Like Norma Desmond (Swanson), a fallen star of Hollywood’s golden era who’s desperate to get back in the game, but this time she has competition from much younger and more beautiful actresses. As an old silent film starlet you don’t have much to offer in a world where age comes before talent.

Norma Desmond knows that, but refuses to admit it. She is convinced that she’s the one who can save Hollywood, but she needs someone to help her. Her rescue is Joe Gillis, a struggling scriptwriter with a couple of B-movies on his CV, who’s desperate for money. If she could use him to help her with her comeback, she’s doing him a favour too. There’s only one problem, Gillis knows that no one wants Norma back in front of the camera; but should he tell her that? Of course not, she’s paying him. The tension builds up to an inevitable dramatic end.

The casting couldn’t be more perfect for this masterpiece. As a real silent film star Gloria Swanson makes an unforgettable portrait as the faded diva. And William Holden, at that time a small B-movie actor, is on the spot as the down-to-earth writer with big dreams. They both play two different characters but they’re also portraying themselves. And during the whole movie real Hollywood icons pop up in small cameos, such as Buster Keaton and Cecile B. DeMille.

This is a story about Hollywood, but it’s also a story about crime, passion, obsession and love. It’s a passionate love story between a woman who needs to be constantly reassured and a man who struggles between real love and guilt. As ever around the corner, a terrible crime is about to happen.

Norma is obsessed about herself; nothing is good enough for her. It doesn’t matter what people say or do. It’s her way or no way, and in the end it’s all coming back to her.

Before Sunset Blvd, Wilder did Double Indemnity, one of the great classics in the film noir genre. Here he uses all the basic key elements of a film noir. The plot is twisted, has weird characters, voice-over etc, all of these elements are also present in Sunset Blvd making it another great film noir movie.

We all know Sam Spade and Philip Marlowe, and even if Gillis is not a P.I. he’s certainly the perfect victim of a twisted plot. Wilder also uses Gillis voice-over in a very effective way. He tells you everything in the same time it happens. Superfluous maybe, but it can also be brilliant. Just watch Kiss kiss bang bang and you realize how powerful a voice-over can be.

So if you thought that Hollywood is the place to be, where anyone can be a star, watch Sunset Blvd and think again. This movie will leave no one untouched. 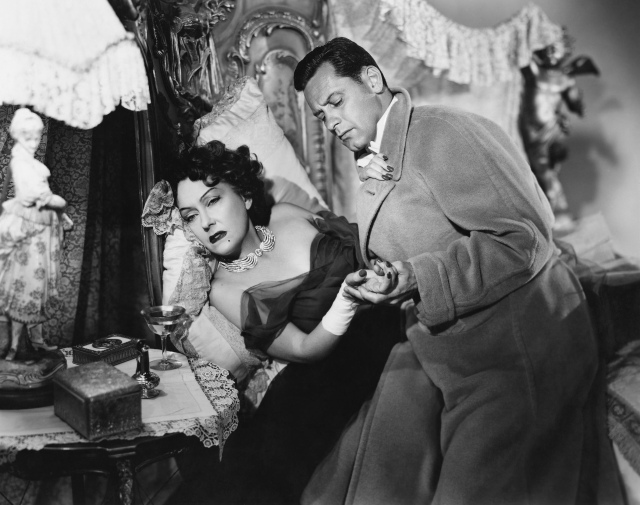 Also, Free logline submissions. The Writing Festival network averages over 95,000 unique visitors a day.
Great way to get your story out: http://www.wildsound.ca/logline.html

Deadlines to Submit your Screenplay, Novel, Story, or Poem to the festival:http://www.wildsound.ca